Home Home Vaccine Passports May Be the Future of Travel - Here’s Everything You...
HomeLifestyleNewsTravel 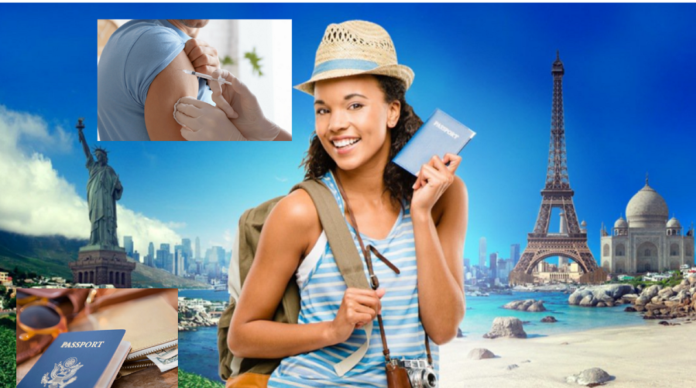 These days, anyone looking to leave the country, or even their state, has to consider everything from available flights to pre-or-post-travel testing requirements. But as the prospect of a rebounding travel industry is increasingly looking like an eventual reality -as vaccines begin to roll out in the U.S. and elsewhere – a new question emerges: what will be required to travel in the future?

Many experts have pointed to the concept of a “vaccine passport,” or a (likely digital) way to store health information that would allow travelers to easily show immunization records when entering countries or even when moving between states.

However, as widespread vaccination is still a while off, and what’s required for traveling varies from country to country, Daniel Burnham, an operations specialist with Scott’s Cheap Flights, told Travel + Leisure that he doesn’t expect traveling to be “easy” until at least 2022.

“It doesn’t necessarily mean all the restrictions at your destination in terms of eating out or not wearing a mask will disappear,” Burnham said of a vaccine passport. “There will still be a patchwork for a long time. There’s not going to be a single vaccine or vaccine passport… I think it’s going to be rocky in the short term.”

Additionally, Burnham said there will need to be “a very big educational push” from airlines and tourism boards to inform travelers of their options.

While fully-implemented vaccine passports may be a while off, we got some expert insight on everything a travel lover — who misses even the thought of getting on a plane — will need to know.

What is a vaccine passport?

At its core, a vaccine passport allows travelers to prove they have immunization against a contagious virus or infection. The record could be on paper or it could be digital.

But experts told T+L the biggest problem with using proof of immunology to cross borders is that vaccines could vary from country to country — and that’s even more true with brand new vaccines like for COVID-19.

While The New York Times reported data from the Moderna COVID-19 vaccine trial to suggest it may reduce transmission (participants who were given one shot of the two-dose vaccine were found less likely to be asymptomatic carriers than those in the placebo group), the data is not yet available for the Pfizer vaccine.

“Everything hinges on the vaccines being shown to eliminate transmission risk or markedly reduce transmission risk,” Dr. Scott Weisenberg, the director of the travel medicine program at NYU Langone Health, told T+L. “Most likely there’s going to be differences in effectiveness in one vaccine vs another… Whether [countries] still require these tests before travel or tests on arrival… there will probably be some evolving strategies that different countries use.”

There are several candidates for COVID-19 vaccine passports like The CommonPass, or the International Air Transport Association’s IATA travel pass that will show information about a user’s test results, eventual proof of inoculation, and a link to an electronic copy of their passport. Security firm International SOS has also developed a similar app itself called the AOKpass.

“On one level, [the CommonPass] is an app that lets you collect, manage, and share your health information on a private level. On another level, it’s a global trust network,” Thomas Crampton, the chief marketing and communications officer for The Commons Project, said. “You have the ability for a government in one country to trust the test results from an entity in another country.”

Is the concept of a vaccine passport new?

No. Vaccine passports have actually been used for a long time — required in some form to participate in public life since the 1800s, Crampton said.

A prominent example of this is yellow fever. Several countries in Africa actually require proof travelers have received a yellow fever vaccination, written inside an international certificate of vaccination or prophylaxis (or a “yellow card”).

“The original concept was actually a digital yellow card,” Crampton said of the CommonPass. “The way that they have proved that is through pieces of paper that are non-standardized and regularly counterfeited and tampered with… if on the other hand, you have a system with someone who is tied into this network… it’s an entirely different story.”

The commonplace did a trial with Cathay Pacific Airways and United Airlines and has partnered with JetBlue, Lufthansa, Swiss International Air Lines, and Virgin Atlantic, as well as the government of Aruba.

How is your information stored?

Privacy concerns are paramount and each vaccine passport that has been proposed works differently.

The commonplace, which is connected to more than 300 health systems, allows users to log in to their health provider’s site within the app. The app then tells users what tests (or eventually immunization records) they need and generates a QR code the traveler can show to authorities.

“We’re not inventing any technology,” Crampton said. “There is no third copy of that data anywhere… We’re not using a fancy technical [system]… to protect things. What we’re using is solid architecture.”

Will a vaccine passport eliminate the need for masks and other common safety measures?

While we all hope to get back to life as normal eventually, it’s going to take some time. Stocking up on some comfortable travel masks and hand sanitizer in the meantime is the way to go.

“Whether [people are] in their own neighborhood or visiting somewhere that’s higher risk, until we have clear information that the vaccines are eliminating that risk of transmission, they should still maintain those rules of social distancing and mask-wearing and hand hygiene,” Weisenberg said.

The short answer is we don’t know yet. Perhaps they will in the long run, but not necessarily in the immediate future.

Israel, for example, has said it will issue a “green passport” to those who are vaccinated, allowing them to visit restaurants or skip potential quarantine rules, Reuters reported. But every country will likely have different rules.

“It’s not a get out of jail free card,” Burnham said. “Part of it will also be what can you do when you get to where you’re going? There’s a lot of places I would feel safe to go and safe to fly there, but if you can’t do what you want to do in a destination… that will hold people back.”

Even once vaccines are prevalent, Burnham said the “spontaneity” of travel won’t come back for a long time.

“I think it will help — it’s the first step,” he said about vaccinations. “But it will be a while before you can say casually you’re going to go on a weekend trip to Europe.”

The start-up, which has obtained approval from the ACPR to issue any type of contract, offers in housing, health, and animals before launching by...
Read more
Business

"Bitcoin and Ethereum have returned to close to major supports… not to be broken down, otherwise there will be a downward acceleration. With the...
Read more
Business

In case you're a dad, I trust you had a cheerful Father's Day! So what's the significance here to you? In spite of the...
Read more