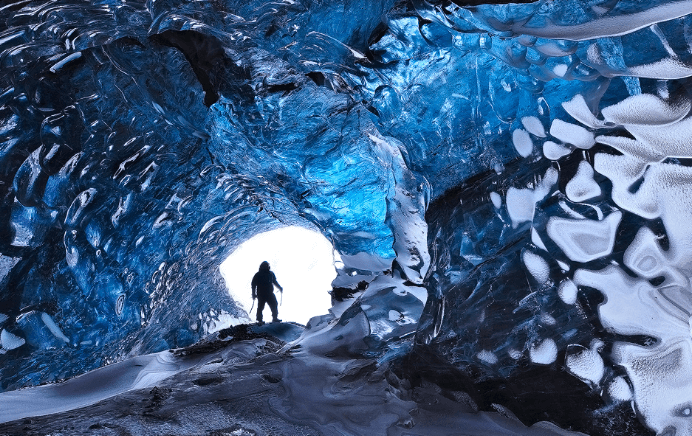 Winter holidays to cold places do not have to be all about skiing or snowboarding if you know where to go for an icy adventure.

Here, we round up the northern hemisphere’s wondrous winter spectacles . . .

Majestic: Ice skaters in New York’s Central Park, which is ‘extra enchanting in the winter

Central Park in New York City is the Big Apple’s biggest. It’s extra-enchanting in the winter and the city will be now open to British tourists from November.

Thick snow covers the pines, the lake freezes over and a hush falls and your breath becomes visible…

At dusk, old-fashioned street lamps lend pockets of warm yellow; by day, visitors can hire snowshoes to explore the open meadows, skate on one of the park’s ice rinks or, if conditions permit, go sledding on Pilgrim Hill. The penguins and snow leopards at Central Park Zoo, which remain open in winter, are always delightful.

How to do it: Four nights’ room-only at Manhattan’s cool Fifty Hotel & Suites from £1,298 pp with flights and private transfers ().

Every winter, some of Iceland’s glaciers form natural caverns as the summer meltwater freezes.

Displaying a rippled effect, their thick sheets of ice are coloured an intense spearmint blue. Though they look different each year — and sometimes don’t materialise at all — the most reliable are inside the mighty Vatnajokull glacier, Europe’s largest.

What else is good? You’ve a good chance of spying the northern lights, while popular attractions such as Gullfoss waterfall or Haukadalur’s geysers are likely to be far quieter than in summer. And amid decidedly Arctic temperatures, the Blue Lagoon’s warm, spring-fed waters will feel terrifically toasty.

How to do it: A four-night fly-drive via Jokulsarlon is from £695 pp B&B, including flights and car hire ().

With Canadianaffair.com you’ll get the chance to view polar bears in the wild from a close (but safe) distance

Begin a two-center break in the world’s ‘Polar Bear Capital’. Churchill, in Canada’s northern reaches, borders a community of these beautiful but ferocious beasts. In winter, as the bears hunt seals in Hudson Bay, you’ll cross the tundra to view them from a close (but safe) distance.

After dog-sledding and Inuit-style ice carving, fly to Toronto for a night to enjoy snowy views from the CN Tower, or stroll St Lawrence Market, one of the world’s greatest foodie bazaars.

What else is good? The Niagara Falls are partly frozen in winter, creating a fairytale, icicle-ridden spectacle.

How to do it: Seven nights cost from £6,053 pp, including flights, 11 meals, transfers and activities in Churchill ().

Head to the Finnish ski resort of Levi, pictured, to catch a glimpse of the northern lights

Levi in Finnish Lapland is one of the world’s best places for seeing the northern lights (or aurora borealis), green disturbances in the magnetosphere caused by solar winds.

The region supposedly has eight seasons, not four — a local Sami belief that illustrates this village’s close connection to nature. Ten miles outside Levi stands the Levi Northern Lights Village. All 40 snug cabins here have half-glass roofs, so guests can scan the skies from bed. December to March is the best time for sightings.

What else is good? On an Aurora Cabin Escape trip, you’ll also go on a dedicated, expert-led northern lights search aboard heated sleighs. Snowshoeing, snowmobiling and riding on a husky-pulled sled on safaris are also part of the package, taking you into pristine, powder-white forests and across icy rivers.

How to do it: Four nights from £1,745 pp full-board with flights, transfers and cold-weather clothing ().

Who can blame them? During chilly winters, families of red-faced Japanese macaques (aka snow monkeys) gather and socialise in hot springs at Jigokudani National Park, near the town of Yudanaka Onsen. It’s easy to hike in and watch this spectacle, which is surreal because of the human-like gestures.

What else is good? Beginning in Tokyo and finishing amid Kyoto’s leafy Buddhist temples, a self-guided ‘Snow Country’ trip also combines guided monkey-viewing in Jigokudani with a soba noodle-making lesson, a pause in the old samurai city Matsumoto, with its Black Crow castle, and a sake-specialist bar in the snow-sloshed Japan Alps.

There’s a stay in an authentic ryokan, with tatami-mat bedding, and time set aside for snowshoeing.

How to do it: Eleven nights from £3,750 pp B&B with all transport, some guiding, a snowshoe tour and a geisha ceremony, but excluding flights ().

Children celebrate the holiday of Maslenitsa, which is Russia’s take on Pancake Day

Headlining several ice-skating options in Russia’s second city, the rink at Kirov Central Park is found on forested Yelagin Island, where it’s also possible to go skiing and sledding. The rink neighbors a Christmas tree, which endures long beyond the festive season.

What else is good? Despite sub-zero temperatures and as little as four hours’ daylight, St Petersburg is a blast in winter.

The Maslenitsa holiday, Russia’s take on Pancake Day, is celebrated for an entire, vodka-soaked week in February, and ballets such as Swan Lake and The Nutcracker are performed during the Mariinsky and Hermitage Theatres’ winter seasons. You could even hire a local to teach you ice fishing on the frozen Neva River.

How to do it: Four nights’ room-only at the modern, central Ambassador Hotel from £868 pp including flights and transfers ().

The Swedish town of Kiruna, pictured, is near the ice hotel and has plenty of cross-country skiing and snowmobiling routes

There are multiple ice hotels across Scandinavia, but northern Sweden’s original one remains the most impressive.

Recreated each year and as much ‘art gallery’ as accommodation, Icehotel will open for the 32nd time from December to April. In 12 ‘art suites’ featuring wacky designs by global artists, and two dozen standard ‘ice rooms’, guests sleep inside sleeping bags atop snug reindeer furs.

What else is good? Nearby Kiruna is full of hiking routes along which winter visitors can cross-country ski and snowmobile, or enjoy reindeer sleigh and dog-sled rides. You could see the northern lights, too.

How to do it: Three nights from £359pp B&B with transfers and a night in an ‘ice room’, excluding flights ().

What do the Great Pyramids of Giza, Disneyland and giant Buddhas have in common? They’ve all been recreated as colossal-scale ice sculptures at north-eastern China’s remarkable Harbin International Ice & Snow Festival — some of them entire buildings that visitors can enter.

An expo displaying them is held annually from mid-December to late February in the eponymous city. The sculptures are magically illuminated after dark, and you can try out ice soccer or ice golf.

What else is good? Harbin also has a conservation park containing Siberian tigers. Trips can be extended to take in the Terracotta Army or Great Wall of China.

How to do it: Six nights from £2,250 pp B&B, including flights, bullet train transfers, lunches, entry fees, and visas ().

Even better, it’s possible to walk behind the ice curtain and examine it up close in silence.

What else is good? Jagala is a 30-minute car journey from Estonia’s capital, Tallinn, whose medieval churches and merchants’ houses are even cuter than usual when covered in snow.

Trips can also involve a walking tour, with quality coffee stops when necessary, and the thrilling experience of being driven over the frozen Baltic Sea to western islands via Keila’s smaller but also-stilled waterfall.

How to do it: Three nights at the cosy Hotel Barbara from £620 pp B&B with flights, transfers, excursions and a 24-hour Tallinn Card giving free entry to 40 museums and attractions ().

With reliable, powdery snow, most slopes are north-facing, 8,200ft (2,500m) or higher and most suited to intermediates. If it all looks familiar, then you must have watched Wham!’s Last Christmas video recently.

What else is good? Situated high above the ‘Pearl of the Alps’ is Allalin, the world’s highest-altitude revolving restaurant, plus the Ice Pavilion’s avalanche simulation experience. One local mountain, Hannig, is devoted to non-ski activities such as sledding.

How to do it: Seven nights’ half-board at the modern-style Hotel Allain, complete with a spa, costs from £985 pp including flights and transfers ().