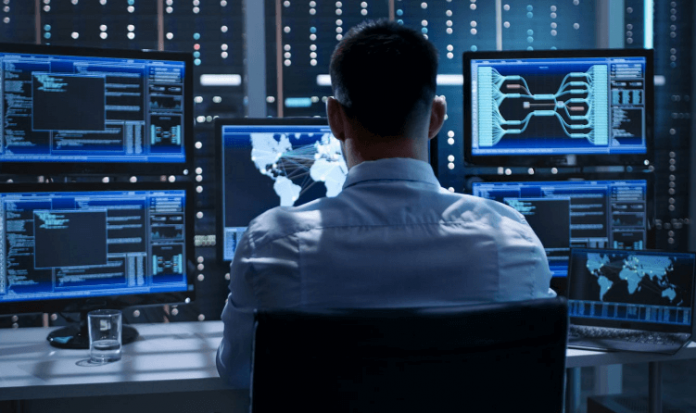 Ian Khan is a futurist who expects that blockchain, artificial intelligence and the Internet of Things will merge together to create an entirely new type of world.

He’s the inventor of the Future Readiness Score, the author of eight books and the chairperson of the Money 20/20 fintech conference.

His first film, Blockchain City, is far from an underground production. The 42-minute film, which is available on Youtube and Amazon Prime, is a businessy, optimistic and somewhat sanitized take on the industry. It focuses decisively on piercing the nebulous concept of “blockchain technology” while largely dodging the sometimes controversial phenomenon of cryptocurrency, promoting blockchain as an efficient tracking mechanism furthering the interests of “the establishment.”

Khan’s positioning in the industry is therefore very much in contrast to the cypherpunk movement — the old guard of the blockchain revolution.

These original torchbearers of the industry were not eager to see the technology used to improve governance systems but to circumvent and effectively overthrow them by turning their outdated systems and processes against them. Such an imagined technological overthrow is, however, unlikely to succeed with the likes of Khan advising governments on how to prevent disruption by way of future readiness.

At a fundamental level, Khan considers blockchain-based systems as “a way to do things in a better way.” The main reasons for this are the efficiency benefits derived from a network that confirms its own accuracy, and the trust that no unauthorized user has been able to manipulate records.

Notably, he does not give central praise to commonly lauded themes like decentralization [away from governments] or the perceived benefits of online anonymity. Instead, he emphasizes how blockchains can be used by governments to better secure private information and prevent things like identity theft.

When it comes to “the last 100 years off, how we’ve been doing business,” for Khan, blockchain is “something that does things better in 1,000 different ways.” On the part of improving government processes, “the efficiency part will come up as a result of the exchange of data between government entities — incredible government services will happen as a result of that.”

This talk of efficiency and the future does not come from a vacuum, as Khan runs a Toronto-based company future-readiness business called Futuracy, which he describes as “an emerging technology educator” that has worked with corporations and governments around the world. The prolific author is also a key figure in the Dubai GITEX technology conference — such a key figure, that he was serving as the stage manager as I arrived to deliver a keynote on the history of the blockchain movement at the event in mid-October. While I was looking to the past, his head was (and is) firmly in the future.

The firm creates a Future Readiness Strategy for each client. These strategies are tailored based on the answers to 200 questions put to the clients which are designed to reveal weak systems and processes which may be disrupted by advancing technology. Depending on the scale of the organization, minor weaknesses can have outsize impacts.

“If there’s an inefficiency in government, common people will suffer,” he explains, noting the need for future-readiness analysis in preventing disruptions to important functions such as medical care and education — both of which have been impacted by the pandemic.

Khan is also looking at other phenomena that promise to shape the future of his clients, namely the Future of Work and Artificial Intelligence The Next Frontier, both of them also titles of his two upcoming films. For him, ideas such as digitization, the Internet of Things, blockchain and artificial intelligence are not standalone innovations. Instead, they are connected and it is only a matter of time until they combine and integrate to form an entirely new tomorrow for the way governments, companies and institutions function.

“It’s very easy to paint the picture where we can talk about the world that is powered by AI that has blockchain in it,” Khan mentions casually as if the idea is in no way terrifying. It’s about efficiency, as AI-blockchain integration will be “saving lots of time, energy and effort,” and information will be less likely to be stolen, according to Khan.

Thoughts from the future

Much of Khan’s recent work has been in Dubai, a city he says “is always trying to do things in a different way.” An early patron of the blockchain movement, “Dubai was one of the first countries with a blockchain strategy at the government level,” Khan says.

Khan believes that the best way for governments, large companies and institutions to ease into the blockchain age is for them to provide all employees with an understanding of the technology “whether they are decision makers or not,” because if an organization is to survive in a changing environment, it has to “become a learning entity.”

The effective way to learn about new paradigm-shifting technologies like blockchain, according to Khan, is to start with examples of successful technical implementation with the goal to “massively simplify the understanding of these big giant buzzwords, so that people can relate” to what the technology is actually capable of and useful for. In practice, this could mean investing in education courses — perhaps beginning with watching his film.

Despite his emphasis on learning the basics, Khan concedes there is no need for everyone to have more than surface-level knowledge. After all, blockchains are horribly complex, but the way we interact with them could be made a lot simpler. Just as not all car users need to understand exactly how a combustion or electric engine works, in the future it will be the “blockchain that is taking care of things underneath the hood,” he says.

Another way in which organizations, especially governments, can harness the benefits of blockchain is to open up the ideation process by giving as much creative freedom to their people as possible, in order “to come up with ideas that can really change the way they do things.”

On this virtue, Khan gives special praise to Estonia, a small European country of only 1.3 million, where he says “there’s a lot of freedom to express” one’s ideas to the highest levels of decision making. As a small country with a huge emphasis on technology, as evidenced by the eResidency program making it easy for digital nomads to operate businesses from the country, Estonia has forged a reputation as a digital hub.

The third way, Khan says, is for organizations to continuously run small experiments and pilot projects “that prove a point,” even if there is no obvious short-term benefit or return on investment. As a prime example, Khan brings up Zug, a Swiss city of 30,000 which in 2016, adopted Bitcoin as an option for paying city permits. Due to the success of the experiment, Zug soon became known as “crypto valley” as blockchain companies from around the world opened offices there.

Instead of being a blockchain native, Khan is future-native. “I just love learning these things and understanding them and helping others understand them,” he proclaims.

He was born on the Indian side of Kashmir, a region whose other half lies in Pakistan. There, Khan recalls that he became interested in emerging technology at the age of six when he saw a computer at school. “It was a BBC Micro hooked on to a black and white screen that had Pac Man on, and my mind was completely blown,” he recalls.

He studied engineering at Kuvempu University in southern India between 1995 and 1999, obtaining a diploma in software at the same time. Soon after graduation, he moved to Bahrain where he worked in a sales and marketing role in the energy industry, while also working towards a diploma in journalism from the London School of Journalism which he received in 2003. In 2007, Khan moved to Canada, where he lives today.

In Canada, Khan tried his hand at a number of side hustles, upon which he founded Agnitio Solutions. He tried his hand at numerous projects and startups over four years, until “I got into the publishing industry and started a healthcare magazine,” he recalls. In his free time, he continued to study, earning a project management professional certificate from Humber College in 2009 and a certificate in public relations from the University of Toronto the following year.

Khan had the idea to make a documentary about the blockchain revolution in 2018, around the time that he attended the first Future Blockchain Summit in Dubai, part of the larger GITEX technology convention for which Khan serves as Smart Cities Conference Chair. He saw that, in addition to blockchain being incredibly confusing to most people, “there’s lots of hype around it and there’s lots of misinformation around it,” he notes.

“The story needs to be told that clarifies things, brings some light to the situation and helps business decision makers, governments leaders and individuals understand this technology better”

Blockchain City – The Future of Cities Driven by Blockchain tells a “story of cities around the world and their shift towards being technologically powered through Blockchain.” In the 2019 film, he interviews representatives of various governments who speak on the wonders of blockchain technology and the opportunities it holds for making societal functions more efficient.

In line with his mantra of teaching from real-life cases, blockchain use cases that were brought up include preventing over-fishing and child trafficking. These examples of the next level of the digitization of governance infrastructure can help global institutions “join hands and take the next steps together.”

While Blockchain Cities largely avoids cryptocurrency, he has made a separate documentary titled The Bitcoin Dilemma on that subject. It is technologically agnostic and neutral of any politics or ideology, which is known to permeate the cryptocurrency industry.

Topline Consumer prices rose 7% in the 12 months ending in December, according to data released Wednesday by the Labor Department, ticking up only slightly after...
Read more
Home

“Cancel for any reason”...
Read more

Topline Consumer prices rose 7% in the 12 months ending in December, according to data released Wednesday by the Labor Department, ticking up only slightly after...
Read more

Editorial Note: We earn a commission from partner links on FLC Advisor. Commissions do not affect our editors' opinions or evaluations. More than 42 million...
Read more
Load more