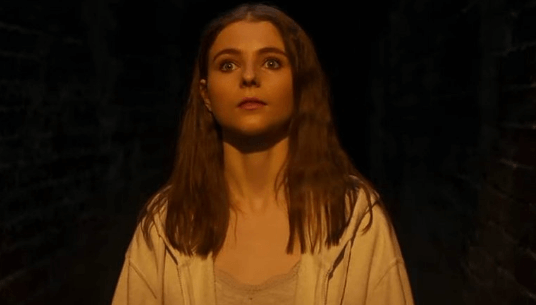 “Last Night in Soho” — the latest horror film from “Shaun of the Dead” director Edgar Wright, out Friday, Oct. 29 — features a modern-day fashion student Eloise (Thomasin McKenzie) who at night finds herself transported to 1960s London. There, she follows an aspiring starlet named Sandie (played by real-life fashion plate Anya Taylor-Joy), as she descends into degradation and doom…

“Last Night’s” Soho abounds with grime, gore and ghouls galore — yet even at its most ghastly, it exudes a seductive glamour, thanks to costume designer Odile Dicks-Mireaux.

“The clothes needed to be beautiful enough that Eloise would then feel inspired [in her own contemporary designs],” Dicks-Mireaux told The Post. “But they also had to be as authentic to the period as possible.”

To get that swinging ’60s vibe, Dicks-Mireaux watched dozens of films from the era — including Roman Polanski’s stylish thriller “Repulsion” and the teen exploitation flick “Beat Girl” — and studied ingenues like Brigitte Bardot (whose tousled blond locks inspired Taylor-Joy’s mane in the movie), actress Julie Christie and singer Cilla Black.

She also looked at hundreds of historic photos of Soho, which had its own distinct style at the time.

“Soho and around there was very much a theater world — where people came into town dressed up and put their best jewels on,” said Dicks-Mireaux, calling the area “flashy.”

Dicks-Mireaux drew on that razzmatazz for Taylor-Joy’s first look for the film, a stunning peach chiffon tent dress that she wears to the famed Cafe de Paris nightclub.

“That actually came from a paper pattern that I found,” Dicks-Mireaux admitted. “At the time, a lot of women — including myself and my mother — made their own dresses, and that dress had a pattern whose shape was quite simple.” That was key, since Sandie is a wide-eyed ingenue with no money, and would have had to sew her own frocks.

In other words: “It couldn’t be high fashion, but it needed to look sophisticated enough to get into the Cafe de Paris.” Dicks-Mireaux based the pinkish hue on a photograph of Twiggy wearing a similar dress. “It’s such a beautiful color … and it goes great with blond hair.”

The white vinyl coat that both Sandie and Eloise wear throughout the film, meanwhile, was initially supposed to be black, inspired by the sleek black mac Petula Clark wears in a video of her singing her hit “Downtown” (which Taylor-Joy also performs in the movie). But Dicks-Mireaux changed her mind when she saw Julie Christie wearing a white version in the 1965 movie “Darling.”

“It was so great for all those night shots,” she said. She then found a white vintage coat in a costume shop that fit Taylor-Joy like a glove. She also found white space-age Courrèges boots that she had remade in the actress’s size.

The coat was so fabulous that the filmmakers rewrote the script to have McKenzie’s character — newly obsessed with Sandie — go into a vintage shop and buy a similar style. “It just came out of trying on things with the girls and always keeping the collaboration and dialogue between everybody open.”

But probably the biggest surprise came from Terence Stamp, the 1960s heartthrob who plays a rather nefarious barfly in “Last Night in Soho.”

“I watched his earlier movies [for inspiration], and when I finally met him, he said, ‘You know, you can use my clothes [for the film],’” Dicks-Mireaux recalled. It turns out Stamp “adores” clothes and had an extensive collection, which the customer used to pattern actor Matt Smith’s slick 1960s suits.

“We copied the silhouette of one of his coats for Matt,” she said. “It was really fun.”