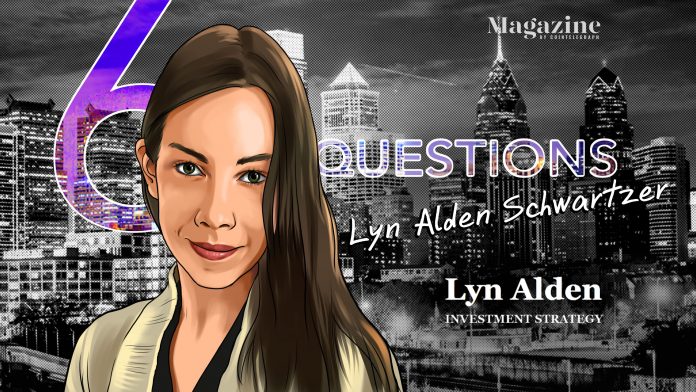 We ask the buidlers in the blockchain and cryptocurrency sector for their thoughts on the industry… and we throw in a few random zingers to keep them on their toes!

This week, our 6 Questions go to Lyn Alden Schwartzer, founder of Lyn Alden Investment Strategy, which provides an investment research service for both retail and institutional investors.

Lyn Alden began her career in engineering. After working in the automation industry as an intern, she graduated from college and started as a junior electronics engineer for an aviation simulation facility. Over the course of a decade, Lyn Alden worked her way up to become the head engineer of the facility, overseeing its project teams, contract staff and technical finances…

1 — What is the single most innovative use case for blockchain that you’ve ever seen? It may not be the one likeliest to succeed!

The unmistakably innovative use case for blockchain is solving the double-spending problem, thus allowing people to transact and store value without a centralized third party.

Everyone is looking for “the next thing” that blockchains will be applied to, but I think people underestimate how big that total addressable market is from the first real application of blockchains: a peer-to-peer electronic cash system.

The entire world has a store-of-value problem. Interest rates in all developed countries are below the inflation rate. For lack of good money, we have monetized everything else, such as stocks, houses, luxuries and other things. In other words, we store a monetary premium in otherwise non-monetary assets above and beyond their utility value, as we want to hold anything other than cash. This is a problem leading to tens of trillions, or even over a hundred trillion dollars worth of monetary premium stored up in non-monetary assets.

And then beyond that, a significant part of the world has a payment problem. International payments are costly and inefficient — they face capital controls, they don’t have good access to cheap micropayments, they can be sanctioned, they can be surveilled, they can be confiscated from and so forth. The ability to send censorship-resistant payments is huge, and it’s something that many people in developed markets don’t think about too often, but they’re a huge deal for emerging markets in particular.

2 — What are the top five Crypto Twitter feeds you can’t do without, and why?

That’s a tough question because I like dozens of them. There are plenty of resources that I like from different platforms (e.g., podcasts, interviews, books, articles and so forth), but specifically for Twitter, I guess I have to go with @PrestonPysh, @Gladstein, @Adam3us, @Skwp and @Lightning.

I also like to follow people I disagree with, or broad crypto news feeds, so that my feed is always filled with multiple points of view.

3 — If the world is getting a new currency, will it be led by CBDCs, a permissionless blockchain like Bitcoin or a permissioned chain such as Diem?

I think for a period of time, we are going to have all of the above.

Some countries like China are strongly pursuing the CBDC route, which gives them more surveillance and control over their economy and population. They’ll have a greater ability to surveil transactions, block transactions, automatically debit people’s accounts based on infractions or their social credit score, and program money so that it can only be used in certain places or certain times. It will also give them the ability to go around the SWIFT system, to give them more control over their international commerce with some of their trading partners.

Most other central banks have not done as many years of research into CBDCs as China has and are not able to move that quickly into a new currency system. I think what we will likely see in the United States is a growing usage of regulated and permissioned stablecoins, including entities such as USD Coin, Diem and others. This can be thought of as a public/private partnership in some ways as these technologies get more integrated into the banking system.

Meanwhile, Bitcoin has been operating for nearly 13 years with increasing adoption and is the digital asset that can be thought of as sufficiently decentralized, with the battle scars to prove it. My expectation is that it’ll continue to grow over time and become an increasingly attractive form of global collateral and global money. I think the world will maintain various currencies in various ways, but I expect Bitcoin to grow its market share quite a bit from its current small levels. I certainly wouldn’t bet against it, and unlike CBDCs and stablecoins that degrade in value over time, Bitcoin represents a way for everyone to have inflation-resistant, confiscation-resistant savings that they can custody if they choose to.

I’ve compared this to Game of Thrones. All the political leaders and their kingdoms fight for power and status, while an exponentially growing army of White Walkers builds from beyond the walls, with little respect for the human politicians’ plans and schemes. Politicians have plans for their currencies, but for many people, Bitcoin represents a better form of savings and, in some circumstances, a better form of payment as well — and these advantages might very well interfere with the politicians’ plans.

4 — What talent do you lack but wish you had? How would you use it if you had it?

I lack talent in music. There are some things that I learned — I had a knack for them, like math and science. I also am decent at some creative areas like writing and storytelling. But music is a big weakness for me. Whenever I tried to learn instruments, it was a slow process and never really clicked for me. When I was a kid, I had a dream of playing in a rock band, but I didn’t know the first thing about how to do that. Other dreams were ones that I had tangible ways to accomplish.

My husband can hear a song and then reverse engineer it in his head and play it on the piano. He wasn’t taught to do that, it just comes naturally to him as a talent. I don’t even know where to start with that — it’s like hieroglyphics to me.

That I’m a workaholic.

I’m not as social as I should be, and I tend to prioritize work over relationships. I tend to get self-absorbed in my work and not show enough appreciation for the wonderful accomplishments, interests and activities of loved ones in my life. It’s something I consciously try to improve, and I do think I’ve gotten better at it over time, but it’s a challenge for me…

A lot of people have trouble getting started on a project or thinking of things to do. They have ideas, but they lack initiative or execution. I have the opposite problem where there are a ton of things I want to do, and then I actually start them and work toward completing them — which on its surface is a good thing, but it comes at a cost. I usually feel on edge if I’m not pursuing an objective and am not good at just “being.”

There is a healthy balance, and I haven’t achieved it quite yet.

6 — What’s the future of social media?

Pendulums tend to swing too far in one direction and then eventually get pushed back hard in the other. On one hand, giving everyone a platform has made for a period of incredible innovation and connectivity and has weakened the gatekeepers. On the other hand, algorithms and pick-your-own-news sources have a tendency to pull people into echo chambers and contribute to polarization in society.

A large part of the rise of mega-corporations over the past decade is a result of benefiting from user data and making users the product rather than the customer. Google and Facebook did this abundantly by offering free software in exchange for collecting a lot of information from them. Amazon also collects a ton of data from retail companies on its platform and then develops its own in-house products based on that data.

It seems to me that people will wake up and want to take back their data. There will hopefully be better browsers, better search functionality and better networks, where people become more actively aware of the data being taken from them and start to take it back.

A wish for the blockchain community:

I wish for the blockchain community to lengthen its time preference and focus more on what can be built over 12 years and less on what can be hyped in 12 months. There is a tremendous opportunity here to focus on building solutions that make the world simultaneously more connected and yet also more private, by giving individuals more control over their money and data. The more successful this is, the more it will reduce boundaries that people cannot control, while also allowing them to put up boundaries that they want to…

Topline Consumer prices rose 7% in the 12 months ending in December, according to data released Wednesday by the Labor Department, ticking up only slightly after...
Read more
Home

“Cancel for any reason”...
Read more

Topline Consumer prices rose 7% in the 12 months ending in December, according to data released Wednesday by the Labor Department, ticking up only slightly after...
Read more

Editorial Note: We earn a commission from partner links on FLC Advisor. Commissions do not affect our editors' opinions or evaluations. More than 42 million...
Read more
Load more