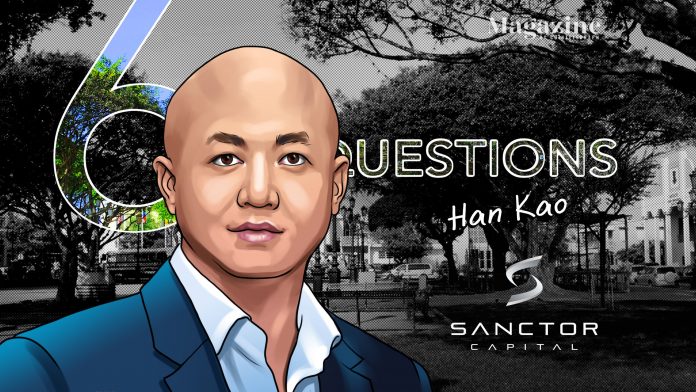 We ask the buidlers in the blockchain and cryptocurrency sector for their thoughts on the industry… and we throw in a few random zingers to keep them on their toes!

Han grew up in New York City and studied economics at Columbia University. He started as a software developer but soon realized he wanted to be an entrepreneur. Over the years, Han has founded several companies: a web development firm (ISI Studios) during the dot-com boom, events marketing (BDBG Marketing) and online ticketing (theDreamVine) companies from 2005 to 2015, and a mobile app studio (J Tech) in 2015…

In 2017, Han began publishing research on early-stage blockchain projects via Crypto Briefing. Today, Crypto Briefing is one of the top crypto research publications, with over 1 million monthly readers.

With Sanctor Capital, Han hopes to help guide other founders in the space to find their own success. It recently launched Sanctor Turbo, a Y Combinator-style mentorship program to support missionary founders.

1   — What does decentralization mean to you, and why is it important?

To me, decentralization represents a tectonic socioeconomic shift for the modern world. For centuries, the world has relied on centralized governments, financial institutions and other centralized organizations to imbue us with a false sense of security and safety.

However, it’s becoming abundantly clear that those same organizations and authorities that we have granted these such powers to are often not acting in the best interest of their constituents and are merely looking after their individual selves. Moreover, the costs that we pay for this false sense of security are inefficient and harmful to the societies that these organizations serve.

From a sociopolitical perspective, decentralization helps distribute and democratize power and empowers the active participants of any given society (or organization), rather than those who are more privileged.

From an economic point of view, decentralization helps remove the costs, inefficiencies and risks associated with needing to trust intermediaries and centralized parties.

Simply put, it just makes everything better — not necessarily easier, but better.

2 — What is the biggest obstacle facing Ethereum today, and what is its biggest opportunity?

Coined by Vitalik Buterin, the “blockchain trilemma” refers to the challenges and trade-offs that exist between the three main facets of a blockchain — decentralization, security and scalability. He notes that developers have to choose between trade-offs among the three facets.

While Ethereum is one of the most decentralized and secure blockchains that exist today, it is also one of the least scalable ones. The move to a more scalable, faster, cheaper Ethereum 2.0 has been, and will continue to be, one of the most complex and challenging developments of the Ethereum development community.

The goal post keeps moving for Ethereum 2.0, and developers are frustrated and are looking for alternative solutions. Developers today want to build applications on chains that can serve as the best foundation for the target use cases they have envisioned.

And the longer it takes for Ethereum to reach an acceptable level of scalability, the more opportunities arise for other blockchains to stake their claims on the market. We have already seen other blockchains such as Solana and Binance Smart Chain capitalize on this opportunity. and we will likely continue to see more momentum grow for other ecosystems like Cosmos, Polkadot, Avalanche and Algorand.

Without a question, $0 Bitcoin is sillier. The U.S. dollar is probably the biggest scam in the history of the world. After the Second World War, 700 representatives from 44 nations got together (in Bretton Woods, New Hampshire) to figure out how to build a new global financial system. And since the United States had the largest reserve of gold, it pledged to fix the dollar to its gold reserve and make the dollar the international reserve currency for other countries.

However, by 1971 — after racking up a huge deficit — we began to run low on our gold reserves. So, President Nixon decided that the dollar would no longer be backed by gold. We have been off the gold standard since, and the U.S. dollar is backed by nothing other than the strength of our military. That sounds like a scam to me. But the problem is that there wasn’t really an alternative until recently.

It’s not really practical to carry around gold bars and coins when you want to buy something. You also can’t transfer a gold bar across the world to relatives. So, Bitcoin is a viable solution for people who want to store their wealth in an asset others might be willing to accept in the future. And the more people see Bitcoin as money, the bigger it will become.

With a fixed supply of 21 million BTC and U.S. dollar inflation reaching record levels, I’m betting that more and more people will be open to accepting Bitcoin as money. We’re really not that far from $500,000 Bitcoin. That’s only one order of magnitude away!

4 — What talent do you lack but wish you had? How would you use it if you had it?

I have been very lucky and have been endowed with a semifunctional brain to think through problems and with capable body parts to execute my brain’s commands. But I don’t have any superpowers, so since you asked, I don’t think it’s too much for me to ask for the ability to create more time.

I wish I had the ability to create just one extra hour in the day for everyone — for myself, for my partners at Sanctor Capital, for our portfolio companies, everyone. I would then take that extra one hour of U.S. time that I have and trade it on a time DEX for a block of Asia time. This way I can spend one less hour every night speaking to Asia and put that toward sleep!

5 — Think of a favorite poem or song lyric. What is it, and why does it speak to you?

OK, I’m going to take advantage of this opportunity to be super cheesy here. A verse that comes to mind is from a song by Drake called “Started From The Bottom.”

When I went full time into blockchain and started Crypto Briefing, everyone thought I was crazy — friends, family, colleagues, literally everyone. “Why would you invest in these scams?” “Crypto is for criminals!” “You’re outta your mind!” “Tulips!” Over and over, I would hear reactions like this…

Fast forward four or five years, and blockchain and crypto is now a real thing and on its way to global recognition and adoption. And my time operating in the industry has given me the experience and knowledge to be able to contribute to society in a really impactful way based on the projects we choose to back and support.

It’s important to note that when I think of “my whole team” from the song, I’m not just thinking of my partners at Sanctor Capital who grinded it out with me through the long bear market on reduced salaries, when everyone quit on us and we were months from pulling the plug — I’m also thinking about every honest blockchain founder who went through the same exact emotional roller coaster in 2018, 2019 and early 2020.

The world has changed in a big way, and now we are at the forefront of a socioeconomic revolution, and we get to influence how we want the next chapter to read. Congrats to all the builders, the holders and everyone who didn’t give up on their vision!

6 — What should we be teaching our kids?

I have a lot to say about education, as I am the product of the notorious New York City public education system. I went to primary school in Queens and high school in the Bronx. Most of my classmates didn’t graduate. I don’t have enough space to say everything I want to say, so I’ll just rant a bit until I run out of space.

Our education system and curriculum need some serious reform. For starters, we need to teach our children history — the way it really happened, not the BS that fills our textbooks.

Next, we need to teach financial literacy starting from a young age — not math, financial literacy! I wasted years of my childhood learning about trigonometry (yes, the sine, cosine and tangent stuff), and not a single time in my entire adult life have I ever used it. I’m not saying that it’s not important, but it wasn’t relevant as a core skill.

I would have been better suited learning about what a profit and loss statement looks like or how taxes work. I would have loved to have been encouraged to be an entrepreneur and taught more about entrepreneurship instead of having it be represented as something only for prodigies and geniuses. A lot of that is changing today, but not fast enough.

And yes, of course, blockchain and distributed ledger technologies should be mandatory classes!

A wish for the blockchain community:

Think big and have a little faith in yourself and your vision.